We are proud to announce the 2017 Ruby’s Rainbow Warriors For Walt $5,000 Scholarship Recipient … 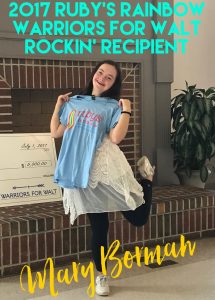 On behalf of Ruby’s Rainbow and Warriors For Walt Charitable Fund, Liz and Trey awarded Mary Borman with her BIG, OLD $5,000 scholarship check! Mary will be attending the University of Arkansas EMPOWER Program this fall in Fayetteville, Arkansas. She will be a part of the inaugural class to turn their dreams of higher education into reality.

Mary is from Fayetteville, Arkansas and graduated from Fayetteville High School. Her hobbies include swimming on the swim team, playing piano and dance team with a specialty in hip-hop. She volunteers with the Down syndrome Connection of NWA and The Cystic Fibrosis Foundation. Mary’s passion is advocating for individuals with Down syndrome, where she is the Arkansas ambassador for Down syndrome and was named the first Arkansan of the Week by Senator Tom Cotton.

When Liz and Trey were going through the Ruby’s Rainbow applicants, Mary’s application stood out. Not only is Mary an Arkansan, but the words used to describe her made their hearts feel all the Walty Feels! Words like “fiercely determined”, “confident”, “strives to be independent” and the list goes on. She truly embodies her motto of “Don’t limit me!” As they learned more about Mary, they saw and felt all of the hopes and dreams they had for their Walt the Warrior. For others not to put him in a box, for him to be independent and for him to turn his dreams into reality. 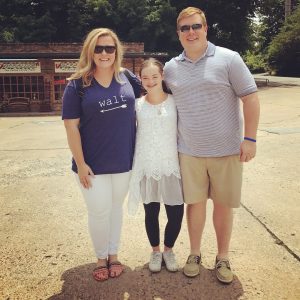 And then they read Mary’s personal essay. She states in her last paragraph, “I am excited to attend The University of Arkansas because my family like my sisters and my aunt and uncle graduated from there. It has been always been my dream to go there like them.” ALL. THE. WALTY. FEELS. When Walt was born, Liz’s dream was for him to go to the same college like his daddio and share the same memories with Trey, just like Trey and Wally (Walt’s grandfather, Trey’s father) have done. How amazing is it that Warriors For Walt is able to give the gift of education and make a dream come true – a dream that seems so simple to most of us – going to the same college as her family.

Join us as we celebrate Mary, honor Walt and live by the Warriors For Walt Mission to create awareness, inclusion and opportunity for individuals with special needs and giving hope to families suffering the loss of their child.

{Warriors For Walt is PROUD to partner with Ruby’s Rainbow – a 501(c)3 nonprofit, whose mission to grant scholarships to adults with Down syndrome who are seeking post-secondary education, enrichment or vocational classes. It is our goal to create awareness of the capabilities of these amazing individuals and help them achieve their dreams of higher education.}

Happiest of Birthdays to Our Boy who changed Our W